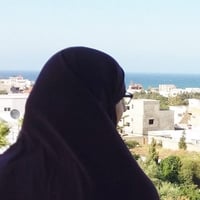 My name is Salma Baklouti. I am a PhD student of astrophysics. I decided to be a Traces.Dreams ambassador because I believe that dreams can come true, and that when there is a will there is a way. I also believe that life is rich, and it needs passionate people to spread its beauty and to contribute positively to the world.

I am going to share my story with you. It all started when I was very young and my father offered me an encyclopedia for children. The first chapter was about astronomy. It captured all my attention; I felt a great curiosity about that immense and beautiful world we barely know.

I started to think seriously about studying astronomy when I was in middle school. In my country, astronomy was not, and still is not, a separate specialty. I asked everybody who would possibly know the way to the stars. The only thing I knew was that I had to choose science and mathematics in high school, which I did. Then, I made engineering studies in meteorology; I found it very interesting, but I was still determined to study astronomy and astrophysics. Astronomy clubs were not enough. I wanted to understand the physics.

My mother promised to support me financially, because she believed in my dream. I started applying and I was accepted in the Paris Observatory. I used to visit their website, dreaming about joining them one day that I never would have thought would come.

I studied there for two years, and I majored in Astronomy and Astrophysics. Studies were hard, but my passion pushed me to go on and never give up. After these two years, I returned to my country and continued my way to the stars. I am now in my 5th and final year of PhD studies.

I dream that one day there will be an observatory in the Tunisian desert, with specialized college courses and degrees in astronomy and astrophysics. Some would say that the priorities of the country are more basic, but I do believe that every piece of land on this planet has its own richness and treasures. If we help each other, I am sure that this dream will come true, and will be a good step forward for my country.

The title of my research is “Effects of Non-Linear Processes of the Magneto-Gravity-Inertial Waves”. In short, we are interested in plasmas, which mean ionized gas, as a state of matter. It is estimated that 98% of the matter in the Universe is in the plasma state. So, the more we know about plasmas, the better we understand phenomena in the Universe. But there are too many physical phenomena that happen in plasmas. Specifically, we are interested in waves, produced by a magnetic field, a rotation of the plasma having a density gradient. These conditions are frequent in many astrophysical systems such as stars’ atmospheres (the Solar Corona), accretion disks (around stars, black holes…), etc. It is likely to explain, for example, the planets’ formation, or why the Solar Corona is much hotter than its atmosphere.

There are theories that try to best explain these phenomena, and our study exists to strengthen them. It is important that many astrophysicists work together on the same topic. It can make a theory stronger, closer to the truth, or rejected. The most important thing is to clarify the mystery and get closer to reality. In many or most cases, the closer we are to reality, the more complicated the study becomes and the more difficult accuracy begins to be.

This, among other topics in astrophysics, is a relevant matter. I believe that in theoretical physics, it is no longer related to a direct benefit. It is rather about enlarging horizons for people, understanding nature, using it for good purposes… It is important to communicate with engineers to make the link between theoretical physics and industry.

Astronomical discoveries have changed the world. Without them, I think it would have taken much more time to make things like MRIs, micro- wave ovens, etc. Engineers were inspired by phenomena that happen above our heads; when scientists first discovered them, they were not thinking about the industry. They only wanted to understand.

In 10 years, professionally, I hope I will be teaching at a university, and continuing my research and collaboration in astrophysics. I also want to learn other things, since learning has become much easier and more accessible. It would be a big mistake to stop learning.

Actually, I have always felt this curiosity to understand the cosmos. My mother used to sing to me a song about the stars and the moon. I found it fascinating! Then, my father offered me that encyclopedia for children, and the first chapter was about astronomy. Again, I found it mesmerizing. I read it hundreds of times! Then, I started to track documentaries on TV. When I had Internet access, I made researches, and used science and astronomy chat rooms to make friends that had the same interests as me. One of them even sent me a scope! It was one of the happiest days in my life. I started observations in the backyard, using the Stellarium software. I remember I had tears in my eyes the first time I saw Saturn and the Andromeda galaxy “in person”.

In college, I co-founded an astronomy club. Then, in engineering school, I joined a bigger astronomy club. My passion grew quickly. It was my first motivation, until I reached the Paris Observatory.

Inspiration came from stargazing. It was fascinating. But I could not have realized my dream easily if my mother hadn’t had believed in me. She saved money for me and invested it in my studies. She pushed me and still is pushing me to learn the most I can. We do believe that something we ignore is a burden. Knowledge enlightens the mind, without any pretension.

Besides the day I received my scope and the observation nights in my backyard, the first day in the Paris Observatory was also a memorable day. I was happy and thankful, but studying astrophysics is not the easiest thing in the world, even with a big passion for science and astronomy. The hardest part was when studies were difficult; I was abroad and I felt lonely. Being attached to my family, and with my father having a terrible disease, I had hard times to keep up with.

But I never gave up.